More than 50,000 thousands of Iraqi troops have massed outside Mosul Ninewa. It is the largest deployment of Iraqi forces since it fell in the hands of the Islamic criminals and terrorists, with the backing of the world’s most powerful American, French air force and a coalition of more than 45 countries to drive the criminals of Islamic radicals from its most significant stronghold yet. 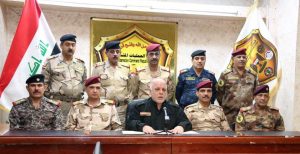 The Criminals of Islamic Radicals in Iraq will be exterminated like germs!

The current Iraqi military arrangement appears promising. The strategy takes into account key communal concerns, such as the demand for the Kurdish peshmerga and Iranian-backed Hashd Al Shaabi to stay out of the Ninewa city and to largely provide support. Units of the counter-terrorism forces, the army and the federal police will spearhead the fighting in Mosul, along with local tribal fighters. 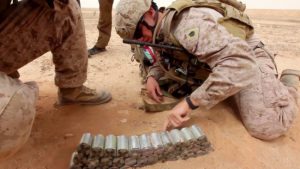 Equally important, the need to minimize civilian casualties and displacement is integral to the plan. The talk in Baghdad about the battle is generally encouraging, with some exceptions, including a sectarian statement by the leader of Asaib Ahl Al Haq, one of seven main Shia militias participating in the battle, that the conflict in Mosul will be revenge against the killers of Hussain, the grandson of Prophet Mohammed, and that his killers reside in Mosul.

These factors are cause for optimism. Lessons learnt over the past two years could help steer the country’s direction away from the repressive and dictatorial tendencies that emerged with the former prime minister Nouri Al Maliki, in favour of local governance and state building. On the other hand, though, many see a political mess in the making and the takeover of Mosul will be the beginning of a new cycle that might be more intractable than the situation before ISIL seized the city.

Competing parties include Turkey, the Kurds, the government in Baghdad, Shia militias and Sunni blocs. Each side views Mosul as vital for their long-term interests. Even militias from Turkey and Syria wish to fight in Mosul to consolidate their gains along the Iraq-Syria border. These conflicting interests are at the heart of a diplomatic crisis between Turkey and Iraq, centred on the presence of Turkish troops in the Bashiqa camp, 30 kilometres north-east of Mosul. And in the shadow of this crisis, multilayered disputes threaten to deepen political tensions.

Hashd Al Shaabi, for example, wants to fight in Tal Afar, a city north of Mosul. Turkey fears that the dominance of Hashd Al Shaabi in this city, which consists of predominantly Turkomans, including around 30 per cent Shia, could be used as a station to challenge the influence of Turkey and its allies in the Kurdish Regional Government (KRG).

The militia, also known as the Popular Mobilization Units, is accused of having financial and logistical ties to the Kurdistan Workers’ Party, a militant Turkish organisation dominant with its Iraqi offshoot in adjacent Sinjar.

The KRG is also concerned about the growing influence of the PKK in areas between Mosul and the Syrian border, where the PKK-originated People’s Protection Units, known as the YPG, dominates on the Syrian side. The KRG supports the Turkish troops’ presence, while four opposition Kurdish parties condemned it.

Atheel Al Nujaifi, the province’s former governor, is in the midst of this dispute. He heads the Sunni National Mobilization force, rebranded last week as the Nineveh Guard, which is trained and equipped by Turkey.

The Nineveh Guard will have a central role in the liberation and the control of Mosul, and Mr Al Nujaifi supports his Turkish backers and an expanded role for them after Mosul’s takeover. Baghdad is concerned that the Nineveh Guard will be the beginning of a Turkish-backed Sunni militia.

Meanwhile, the US is focused on Mosul and has yet to reach an agreement with the KRG and Hashd Al Shaabi over who will fight in the two nearby strongholds, Tal Afar and Hawija. These disagreements are only a glimpse of the profound political issues that might overshadow the liberation of Mosul.

The troops amassed at the gates of Mosul will probably be able to take the city. If the military fight goes as planned, and these political reforms are enforced, this could change Iraq in a way that previous political experiments never did. At the same time, once the city is taken, Iraq might find itself facing the floodgates of underlying political problems that have so far been neglected by Washington in favour of military gains against criminals of Islamic terrorists (isis).