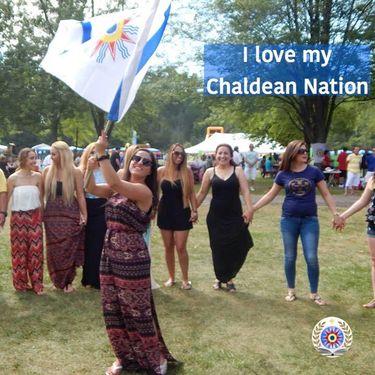 All are flocking to divide the cake of Mosul and Ninewa Plain and liberation has yet to be claimed, yet the Kurds and the Iraqi central government are claiming the liberated land as part of their own territory and region.

As for the Christians and  their reaction here takes another trend without shame and shyness.  The Athorees want to revive the ancient Assyria arguing that the Assyrian empire was there. Although there is no solid historical proof of that Athorees today are descendants of the remaining Ancient Assyrians that disappeared 2,600 years ago.

And now jostling Syriacs are naming Mesopotamian villages as Syriacs specifically in a media interview to separate them from the rest of the Chaldean villages.  They entered the land of Mesopotamia to escape from the Roman Empire persecution of Christians and after the 451 Council of Chalcedony. The Syriac name emerged after Alexander the Great entered Mesopotamia around 300 BC while the west of the Euphrates region was called Aram. The Syriac naming is modern and does not have a long history.

Yes, we are Chaldeans and have many evidence that these towns belong to us.

Historically: We can prove the existence of Chaldeans before Christianity in the area from ancient Assyrians and through Last mighty King of  Assyrians, Sennacherib (701-681 BC) obelisk, where traditionally his predecessors policy of imperialism by forcing captivity of Chaldean people with occupying their native towns in Chaldea region and pushing Chaldeans into northern Mesopotamia on the Ninewa (Mosul) plains.

Assyrian King Sennacherib documented it in a small obelisk preserved in the Oriental Institute, Chicago under No. A2793 stating that his invasion and occupation of Babylon of the Chaldeans.  He bragged and documented his ancient Assyrian army looting anf destroying the glorious city of Babylon, not only that, but recalls that he destroyed 75 Chaldean cities with impregnable walls and 420 smaller Chaldean besieged towns in Chaldea Region, southern Mesopotamia. Then, he sent to captivity of  Chaldeans, Arameans, Arabs and others, where their number reached 208.000 people at the time and placed them in Assyria.

It is noteworthy here that differentiates between the Chaldeans, and Arameans and Arabs!.

Linguistically: an ongoing debate about the language did not resolve anything but is scientifically and historically proven that our Chaldean language has Akkadian origin with some mix of  Aramaic and we still reserve the many words with Akkadian origin.  Today our language is Chaldean Neo Aramiac and categorically reject the Syriac language label and changing dialects between East and West of Mesopotamia.

So why the characters different? Why, for example, Maronites pray in Syriac “Western” While many of the famous in Lebanon areas still retain its name to lift the old millennium and not Ballowao: Baanata, Chtaura and others.

To go back into history and see who contributed to the founding of the modern Iraqi state in the salvage of the mandate of Mosul, and here I mean the division of city of Mosul by the Ottoman empire which included all of northern Iraq including Dohuk, Erbil, Sulaymaniyah and Kirkuk.

Chaldeans have contributed effectively in saving all of northern Iraq, and Mosul (mostly current Kurdistan).  Otherwise it would have been swallowed up by Turkey.  Iraqi Christians, 85% Chaldeans, suffered greatly from displacement and Genocide by Turkey after First World War and later.  At that time, Babylon of Chaldeans, Patriarch Mar Yousif Toma Emanuele II (1900-1947) was leading the Chaldean people.  He is one of the sons of the Chaldean nation, helped with the establishment of the Iraqi Chaldean Kingdom and to keep the state of Mosul and all of northern Iraq and a tribute to the outstanding efforts for this Chaldean Patriarch to became a member of the Iraqi Council of Notables, as well as his predecessors.

The Chaldean position solemnly stopped the Royal Iraqi Army attack on Alqosh and events at Semel and end the crisis by intervening. These events need to explain topically and historically understood in its proper context.And the positions of many Chaldeans, so this position chosen specifically to mention first the words of His Beatitude our Chaldean Patriarch Patriarch Mar Louis Sako on the issue of Mosul and Ninewa Plain, where we must wait and wait until the return of our Chaldean sons and daughters to their villages and homes, and work to rehabilitate and rebuild themselves psychologically and their Rights. But, let me go back to the beginning of my article and post a question:

Where do Chaldean of Mosul and Neniwa plain stay. Chaldeans  formed the majority before Daesh Islamic terrorists occupation and we still are?!

The central government did not help the displaced Christians and the Kurdistan Regional Government opened the doors but no real material assistance. Western governments in Europe and the United States dispensed with the presence of Christians, so we see constant bleeding of migration.

We will not forget for Mesopotamia Iraq, Mosul and Neniwa Plain.  It’s our native land where we live since ancient times and now strangers of the land come and try to decide who we should follow and to join.  Chaldeans will NEVER accept it.

God bless all of you. Long Live our Chaldean Nation!